Given to the world's most prominent medical professionals.

Awarded to outstanding medical professionals, the WAMS MAA will cover WAMS Medal, Shield and Certificate, along with a money prize of $1,500,000.

Academicians are granted international status with the Academy membership titles which give them all the privileges of international protocol and customs exemptions.

Our academic members are provided with up-to-date Medical Sciences education for a vanguardist vision to bring into their practice or research activities. 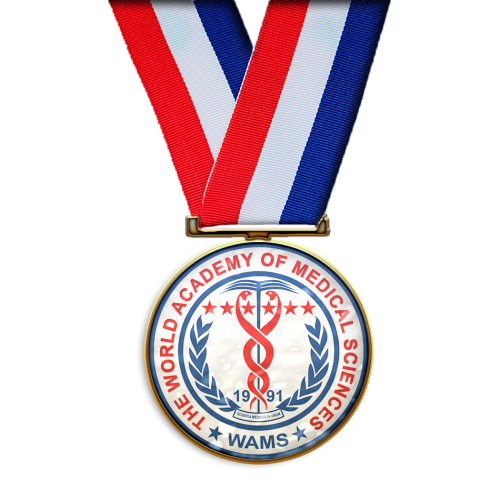 These highly prestigious medical awards are given to selected nominees in medical sciences.

Starting from 2021, the second Friday of September every year, the world's top 300 medical professionals, that is, the most successful, outstanding and prominent 300 medical professionals will be chosen in the annual honor list of the Academy as "WAMS 300". Each of the listed names, who will be nominated only by nominators, will be awarded the year's "WAMS Honor Medal, Shield and Certificate".

The World Academy of Medical Sciences (WAMS) internationally classifies selected outstanding research studies in medicine under the title of “World Advancements of Medical Sciences”(WAMS) and awards the selected ones with the academically prestigious global WAMS Awards / “Medical Academy Awards” [MAA] whose selection process is uniquely done through a publicly open transparent and unbiased voting system.

Starting from 2022, the WAMS, The World Academy of Medical Sciences will annually be awarding entitled medical professionals the global WAMS Awards, the Medical Academy Awards [MAA] in two categories.

The recipients of the awards get elected through an “Academy Points” scoring system which consists of public endorsements, MAA Congressional voting and the WAMS Jury’s voting.

Each Medical Academy Award winner of each category gets awarded with a “WAMS Medal, a “WAMS Diploma”, an “MAA Certificate” and a Money Prize as below:

If a winner is a team or group consisting of two or more writers/owners, prizes are awarded as below:

In case of more than one winners sharing the same Prize Position with equal Academy Points, there is no money-prize sharing. Each of them, regardless of their number, awarded the full amount of the money prize as below:

Applications are made online by submitting research papers. Submissions may be made only by the owners/writers of the papers.

Submissions must be made online via “MAA Submission Form” to the WAMS Central Coordination Office (CCO) between the 1st May of each year and the 30th April of the following year.

Submitted papers get listed at the ResearchPort database which may be viewed publicly on the WAMS website.

Applications are made online by submitting research papers. Submissions may be made only by the owners/writers of the papers.

There is no application fee.

Applications are made online by submitting research papers. Previously published or unpublished, accepted applications are not guaranteed to be published in the WAMS Journal (JWAMS) and neither are they guaranteed to be published/listed at ResearchPort; only about 10-15% of submitted papers get accepted for JWAMS publication and listed/published at ResarchPort. Accepted ones automatically become official MAA candidates.

Applications get processed and followed by the next three stages of the progression, the “Publication”, the ”Presentation” and the “Final”.

Public Endorsements (See details below): While selections out of the MAA PUBLIC LISTS are made through the WAMS’ internal and external “peer-review” evaluation and voting in the “Publication Stage”, Public Endorsements during the same stage also plays a significant role in promoting the already selected papers by contributing to their congressional as well as “Final” stages voting.

Selection for the Congressional Lists: By Peer Voting and Public Voting

Papers selected from the publication lists during the Publication Stage through voting and progressed to the Congressional Stage are to be presented in-detail by their writers/owners at the first available quarterly WAMS-MAA Congress where the presented papers get discussed, evaluated and given consideration by the MAA Congressional Jury’s voting in order to have them either eliminated or promoted to the “MAA Final” to take place in the “Final” Lists of 25 finalists in their own categories.

Selection for the “Final” Lists: By Congressional Voting

At this final stage of the MAA selection process, three of the 25 finalists from each category’s “Final” List, as the winners.

Selection for the Winners: By the “WAMS-MAA Jury” Voting.

The MAA prizes are awarded to qualified medical scientists, clinicians or practitioners for their outstanding and unequaled work or study that distinctly and exceptionally contribute to the science of medicine in the categories Clinical and Surgical Medicine, Basic Medical Sciences and Biomedicine.

- The nominated work or study must be internationally published, in an internationally-recognized medical or medicine-related journal, not more than one calendar year and not less than a week before the date of submission.

- The nominated work or study must NOT, internationally, nationally, regionally or locally, be awarded with award(s)/prize(s) of any kind previously.

- Any work or study that has led to an existing commercial or non-commercial medical or non-medical product can not be submitted. Such submissions will be rejected without review.

- While submitted research-study papers that are already in public domain get automatically listed and displayed in the two categories at ResearchPort during the MAA’s Publication Stage, any papers already-published but not yet in public domain will be included in the lists only along with the applicants’ formal written permission.

The first (inaugural) Medical Academy Awards will be awarded in 2022, the year of the WAMS' 30th Anniversary.

Towards each year's MAA awards, the selection process begins with the Publications Stage which is followed and complemented by the quarterly MAA congresses. Taking place in January, April, July, and October, the MAA congresses provide the most crucial phase of the MAA Selection Process where MAA candidates, through MAA Congressional Voting, get reviewed, discussed, evaluated, judged and selected as the MAA finalists in the two MAA categories.

The Selection Process take place in elimination rounds in which candidates progress through three “qualifying” stages:

In the Publication Stage, the MAA Public Lists in the two categories are announced and displayed online at ResearchPort in alphabetical order. Under the candidates' names, the titles of their research study or work take place. The lists also display the Academy Points the candidates have.

Candidates who have reached the limit of the 100 Academy Points get promoted to the next phase of the selection process, the Congressional Stage.

VOTING: In the Publication Stage, the MAA voting is done in two parts; Peer Voting and Public Voting:

In the “Publication Stage”, selections out of the MAA PUBLIC LISTS are made through the WAMS’ internal and external “peer-review” evaluation and voting which bring the candidates' Academy Points. The peers are registered as MAA Peer Jurors with the official title of “MAA Juror”.

Added to the peer voting, the public votes are generated by public individual and institutional endorsements. Individual endorsements come from medical professionals and scientists. Institutional endorsements come from medical and medicine-related institutions and organizations, etc. While each individual endorser’s vote count as “1 point” which is equal to one vote, an institutional vote counts as multiple points varying from 3 points to 15 points depending upon the institution/organization’s impact factor reflected by its nature, profile, caliber, capacity, and prominence. They may endorse any candidates in any or both of the categories of MAA contenders. Each endorser may endorse only one candidate in each of the MAA categories.

Individual public voters consist of prominent-distinguished medical scientists, academics, scholars, etc from or out of the World Academy of Medical Sciences (WAMS). They are registered as MAA Public Jurors with the official title of “MAA Public Juror”.

The Congressional 25-Candidate Lists display the selected twenty-five qualifying candidates and their papers in each category. Papers selected from the publication lists during the Publication Stage through voting and progressed to the Congressional Stage are to be presented in-detail by their writers/owners at the first available quarterly WAMS-MAA Congress where the presented papers get discussed, evaluated and judged by the MAA Congressional Jury whose voting selects the highest-voted 25 candidates in each of the two MAA categories and promotes them to the “MAA Final” as the “MAA Finalists”.

This is the final stage of the selection process where the final voting takes place to determine the winners of the two categories.

Voting: The voters are the members of the MAA Jury which consists of academics and scholars from and out of the World Academy of Medical Sciences (WAMS) registered as MAA jurors with the official title of “MAA Juror”. They vote to choose three of the 25 nominees from the each of the two MAA categories as the winners of the MAA prizes.

The World Academy of Medical Sciences (WAMS) collaborates with distinguished companies and organizations to bring the Awards Program to life. 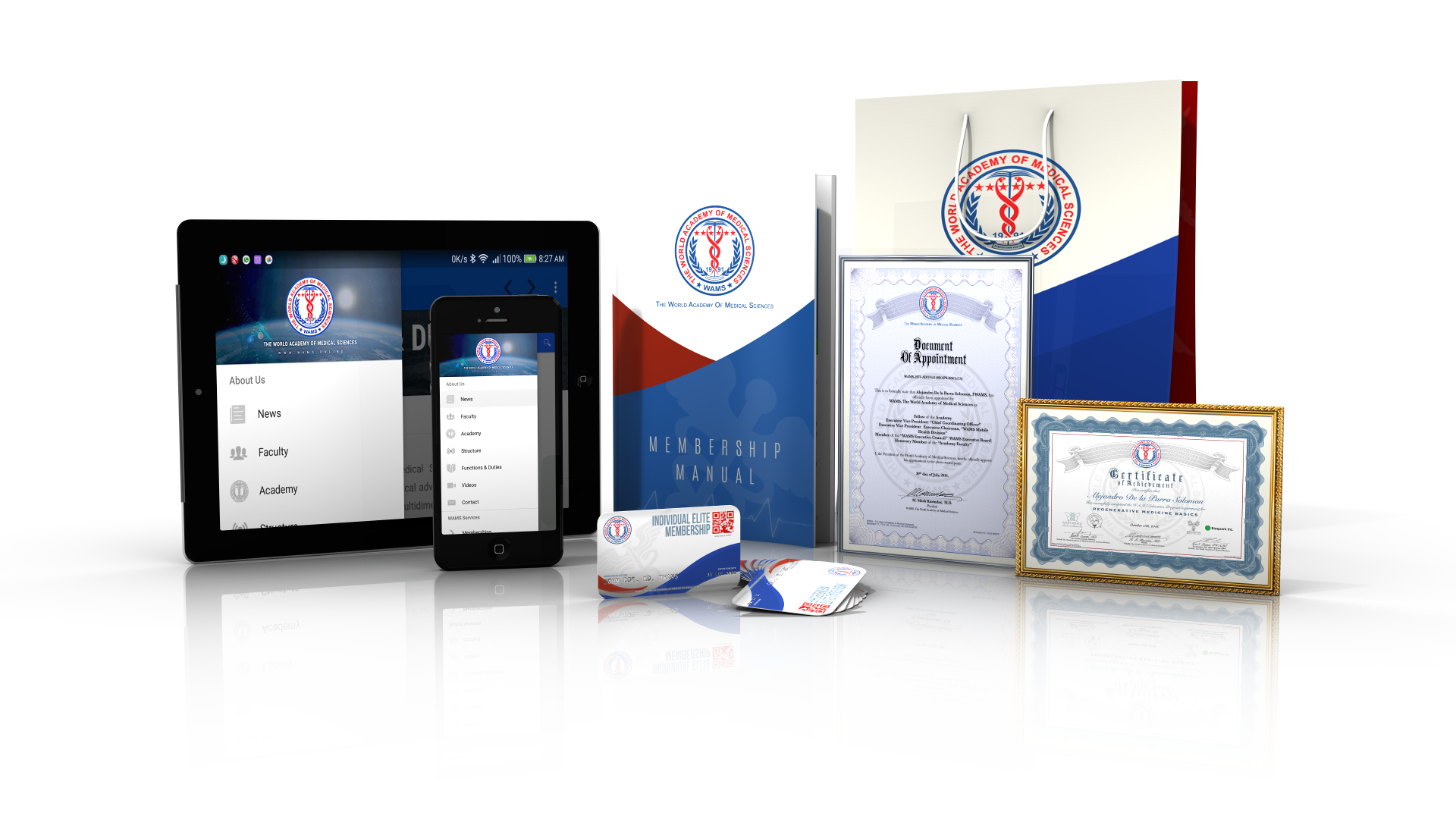 Granted by the Executive Council of the Academy, the WAMS Elite Membership Program offers unlimited access to the materials available on the WAMS official website for a special annual cost. This type of membership provides with expedite eligibility to WAMS Awards Program and fast access to WAMS Events.

The WAMS Elite Membership Program offers the following aspects at a discount price:

Enjoy many WAMS benefits with our basic pack 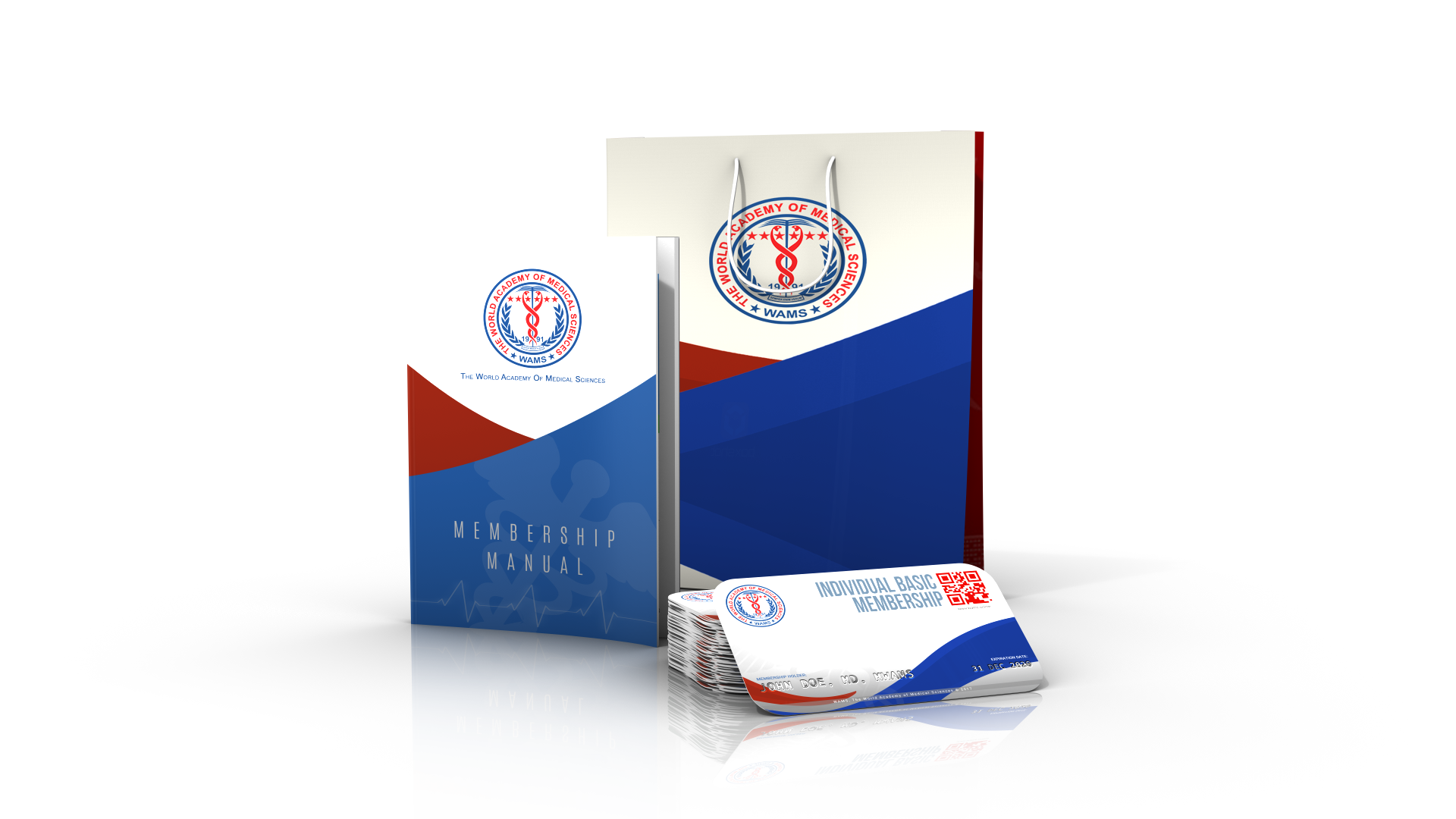 Granted by the Executive Council of the Academy, the WAMS Basic Membership Program offers unlimited access to a portion of the materials available on the WAMS official website for a special annual cost. This type of membership provides with expedite access to WAMS Events Program.

The WAMS Basic Membership Program offers the following aspects at a discount price :

GET BASIC MEMBERSHIP
No apps configured. Please contact your administrator.